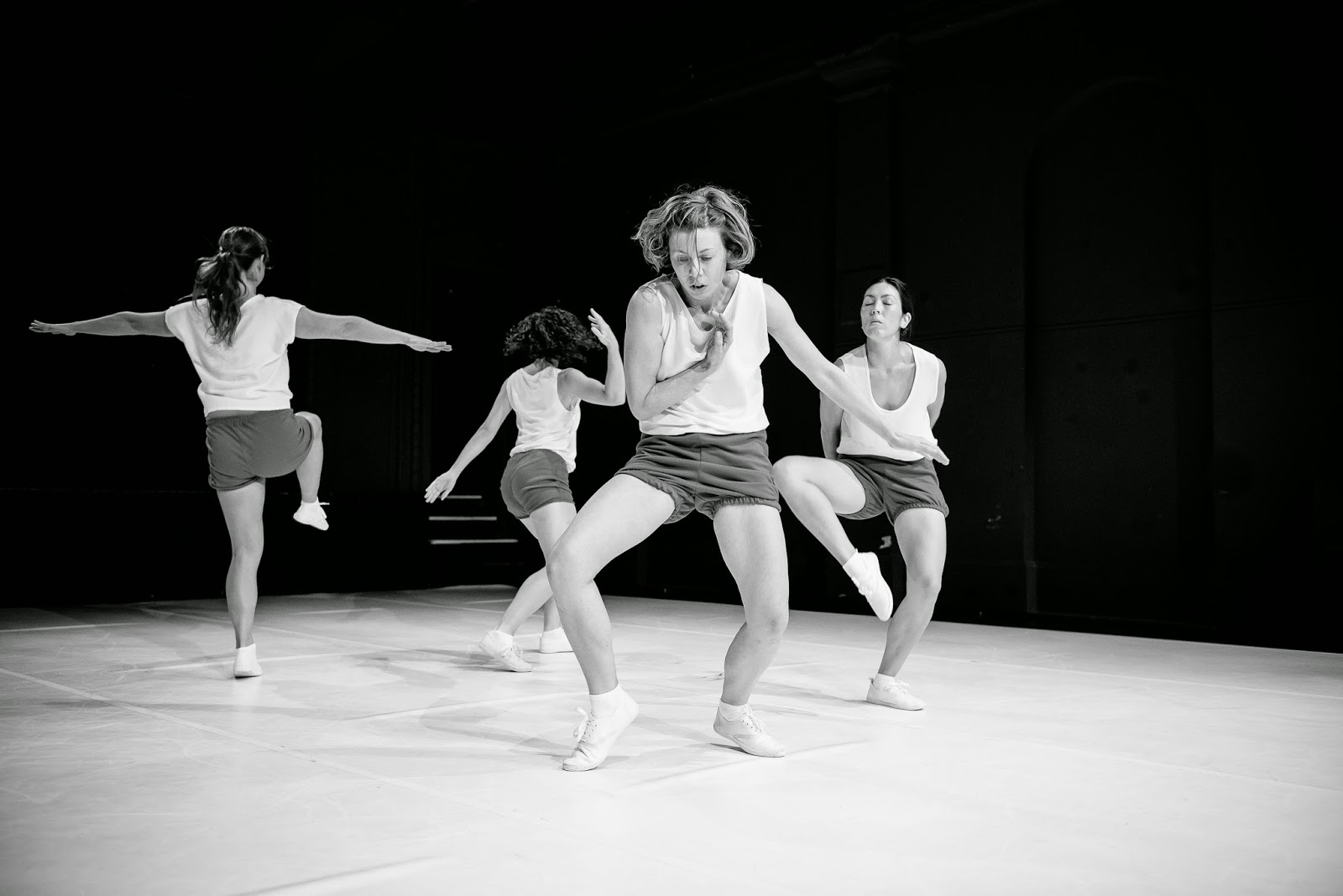 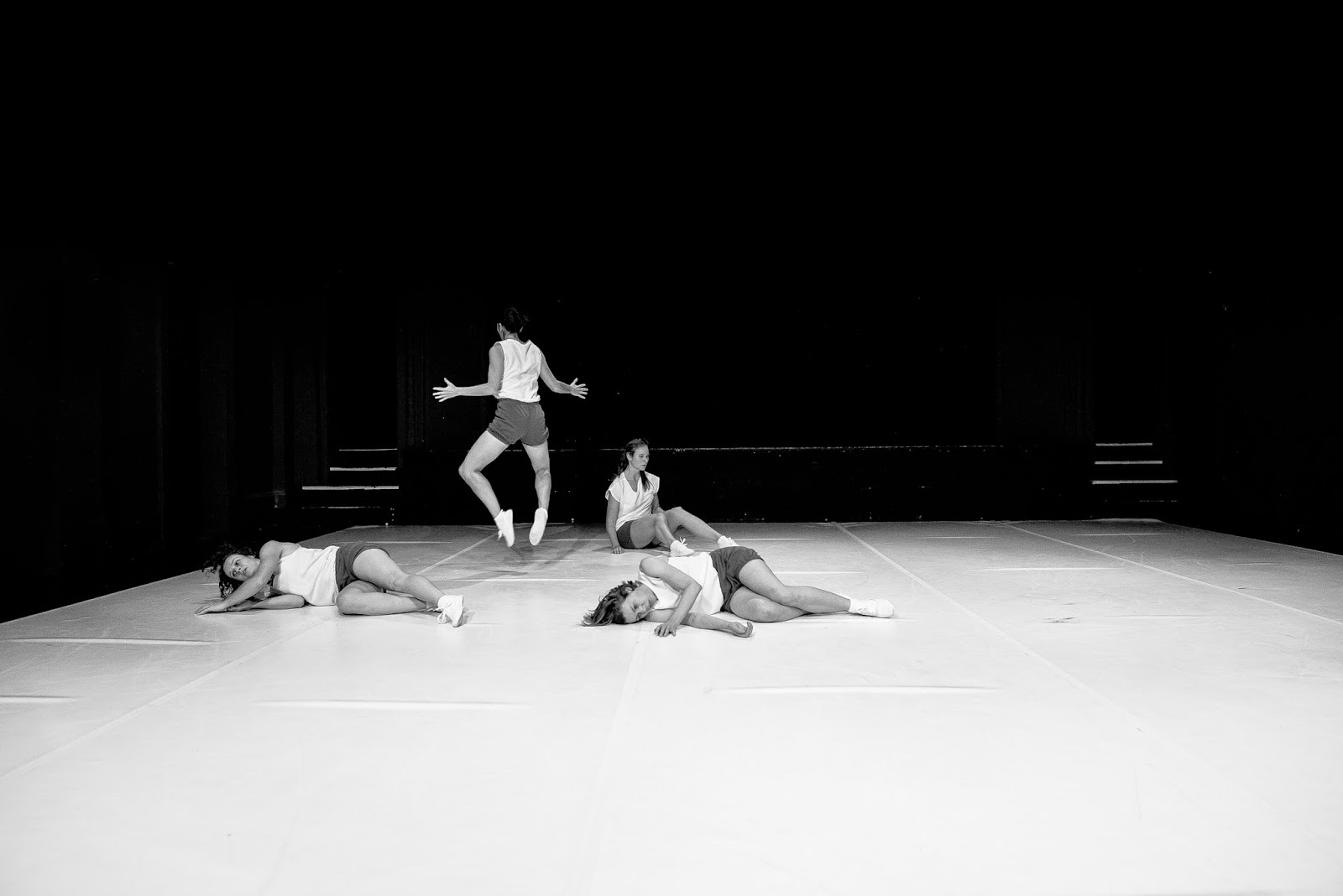 Posted by THE MEANS AND THE WAYS at 7:40 AM No comments: 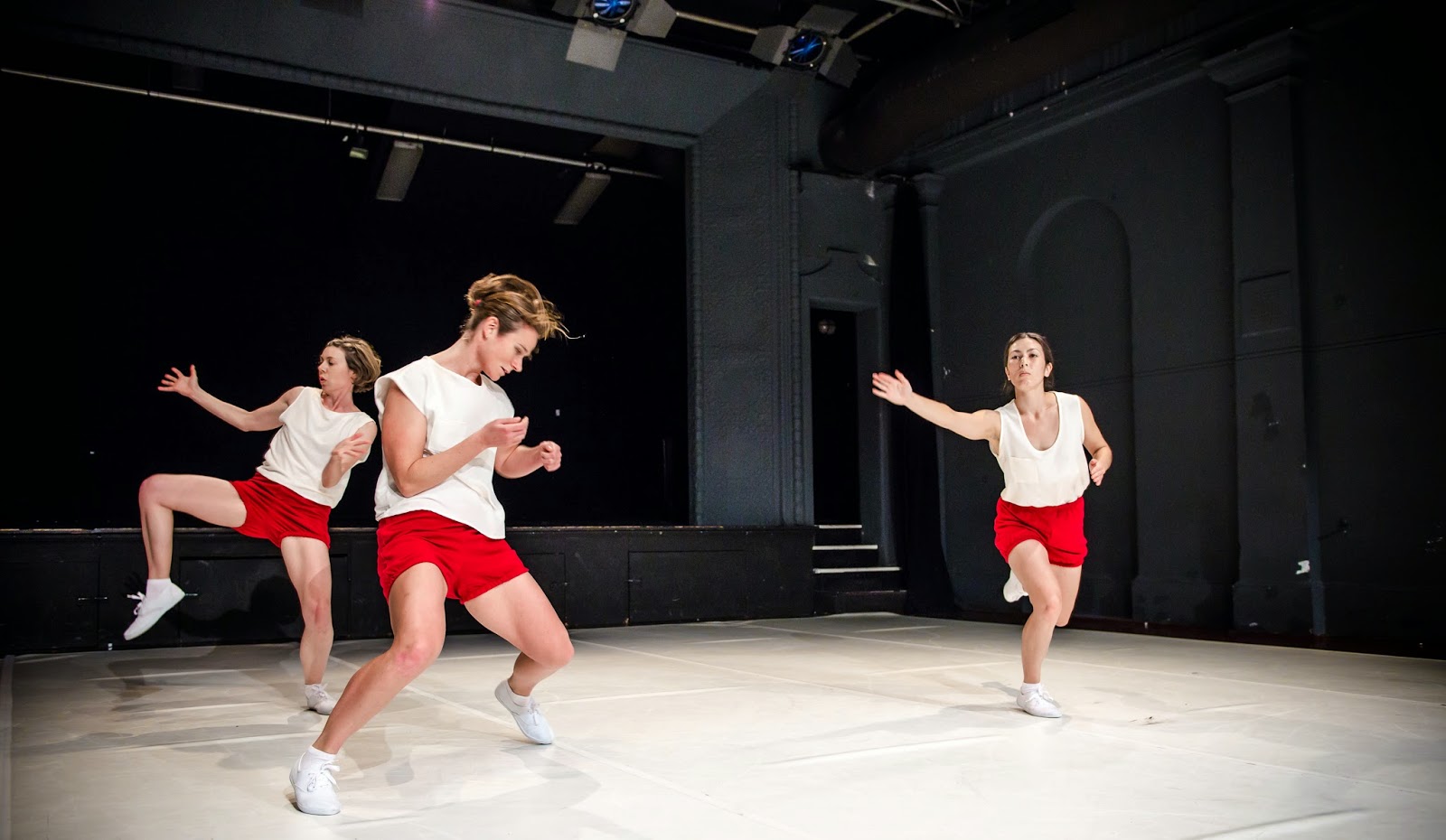 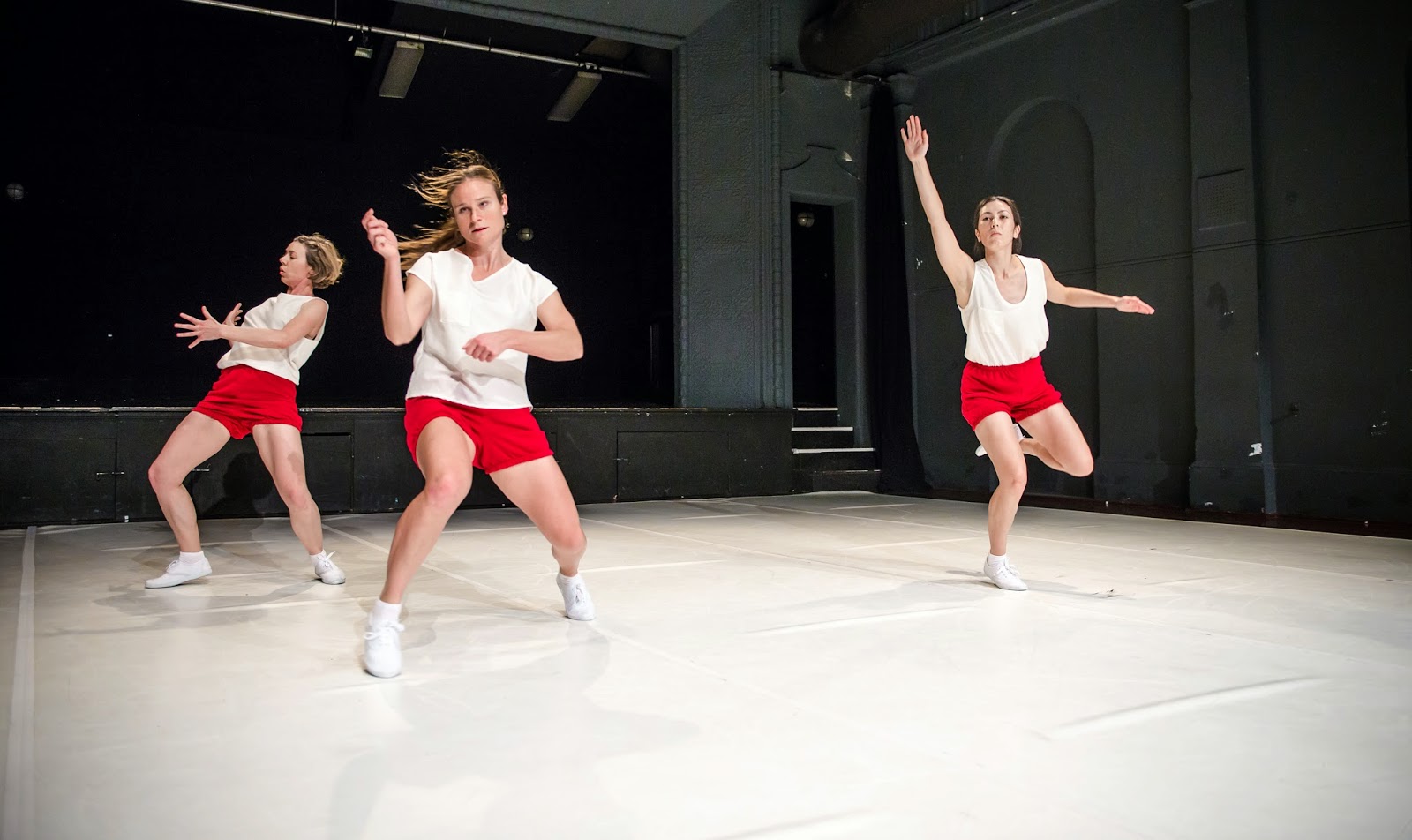 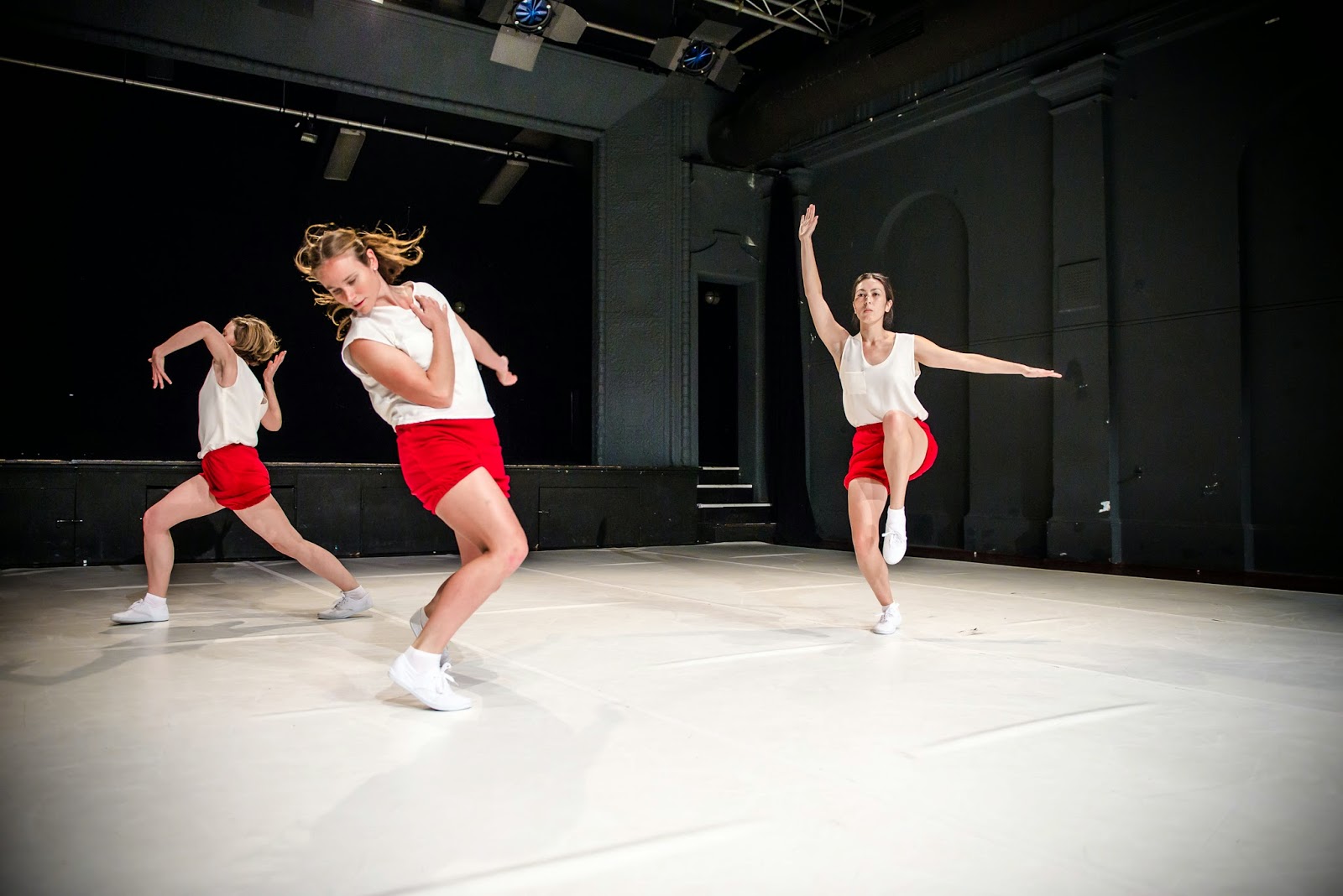 from the Dancehouse season of the Keir Choreographic Award July 2014. Photos by Gregory Lorenzutti for Dancehouse
Posted by THE MEANS AND THE WAYS at 7:37 AM No comments:

1.
So what is it? A set of feelings? A task towards feeling. Are there parameters? Is there a style? Is anything allowed? Some of these questions I think i know the answer to and others well I should just let it form. Today it feels stupid to be engaged in the pursuit of dancing. I realised yesterday that I perceive dancing as an other and what I do is not dancing but an exertion or an unravelling of my body's relation to it. Is this how it feels for other people? Today my cheeks are hot. Too much coffee or the heating or the too much time inside in a kind of obsessing. This is not how to write. Do you notice that you sped up?

2.
I keep thinking about how I need to approach it with rigour. But maybe I don't. It felt good to write down 'a singular process' but maybe a mess of everything is alright too. Attention everywhere. If I'm paying attention to my thoughts - using dancing as a kind of collection point - then what attention is my body paying to what its doing? Is it literally just generating? Moving the blood around a bit faster so fresh stuff runs through my mind. I won't pretend to understand anatomy or biology. The reflection that my difficulty in comprehending maps and their relation to real space - real buildings and streets and thoroughfares, is perhaps similar to my lack of ability with anatomy. The body outside divided up and named versus what it feels like to be inside my own.

3.
An acknowledgement then that five minutes seems to move more quickly, faster than when I started. I think today my dancing is a conduit for thinking. Its slower to write it down and it can move through so many things at once. My hand, my pen, of course, can't keep up but I don't how to spell the sob that is bursting to get out but also shut up you wanker. Why am I thinking about truth? Would it be true to say that it felt most like how I really feel in that moment standing by the drawers, making the motions to pack, when the blood in my head sounded so loud and there was no longer any boundary between my skin and the air, between the noises coming from within me and the sounds coming from without? In fact I disappeared for a moment or everything became one - and its true that I can't believe that I went ahead and did what I did. Silently getting up, getting dressed, wheeling the suitcase out into the dark and softly closing the door behind me.

4.
And it was the desire to push it to the edge. To strip it down. To shout it out. To push, push until something else came through. Its not my place to say who is and who isn't an artist, and its funny that she says yesterday that ethically she thinks its for everyone, but also no its not. I'm tired. Thats clear, and its becoming a bodily habit. There's a kind of push, a muscular tension, that makes me feel I'm actually doing something. Now I'm just writing words on a page. I can't remember when it was that I thought 'do I ever just feel fine?' There is always some niggle, some itch, some ache, some hunger. And now it is legs that need to be stretched, a neck that wants to rest, a face that is full of heat and eyes that want to close.
Posted by THE MEANS AND THE WAYS at 6:34 AM No comments:

works still to be made: les sylphides 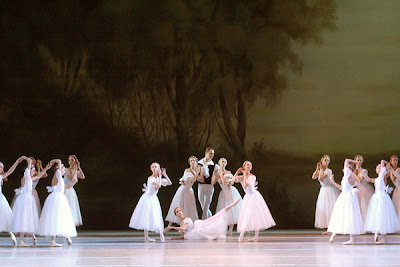 This work takes the form and structure of the original ballet Les Sylphides by Michel Fokine, but reinvents/improvises the choreography. It may or may not use the music by Chopin. It probably won't. Maybe some nice guitar reinventions. I'm not quite sure about the gender balance staying the same either. It might be a bit weird to have one man dancing amongst so many women. Or it could be fantastic.


(I performed in our ballet school concert version of Les Sylphides, which pains me to call 'our ballet school concert version' because at the time and in my memory it was and continues to be completely the real thing. I loved it. The hair, the long tutu, the standing still, the kneeling, the walking round in a circle, the arm wafting and the standing still. I just watched a Baryshnikov version on youtube and felt I knew it backwards. It is an incredible ballet - taking an element of romantic ballet and dispensing with the plot. The first of its kind. Move over Nijinsky. Its time for the Fokine revival)
Posted by THE MEANS AND THE WAYS at 8:45 AM No comments:

Email ThisBlogThis!Share to TwitterShare to FacebookShare to Pinterest
Labels: choreography, dance, works yet to be made

where my heart is 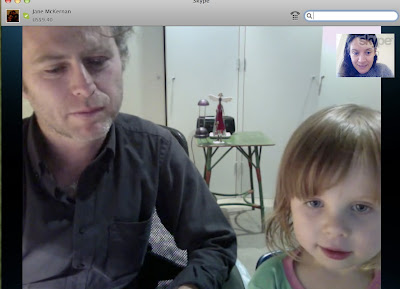 Posted by THE MEANS AND THE WAYS at 9:09 AM No comments:

works still to be made: what we are going to talk about is the main question

what we are going to talk about it the main question

This is a piece that Wendy Houstoun and I played around with last year when we had two wonderful weeks in Berlin. It never quite got anywhere, but since being in Europe again (though a very different part) I've been thinking about it and finally watched the video footage we took. I am quite terrible at the task I am set, but I think i could get better. What we are going to talk about is the main question is a lecture of sorts. It could be performed by me or Wendy or together. It will be meanderingly brilliant.
(the video is us talking about what to do, not actually the piece)
Posted by THE MEANS AND THE WAYS at 4:16 AM No comments:

Email ThisBlogThis!Share to TwitterShare to FacebookShare to Pinterest
Labels: choreography, dance, works yet to be made

works still to be made: alien (film series) 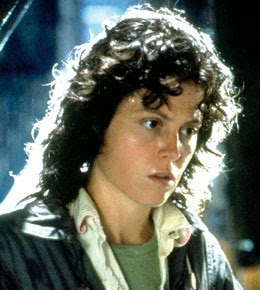 alien (film series)
A solo for Elizabeth Ryan. A verbatim performance of all Sigourney Weaver's action and emotion in Alien (1979). Without props or narrative. Music by Gail Priest.
The next in my film series after Working Girl.

(I don't know why but it takes a long time to get a dance work made or it does for me. For example, I first began working on Opening and Closing Ceremony in January 2009 and it was performed in its finished variety September this year which is a scary three and a half years later. Of course, its not like that is all I did in that time, but still it seems a little slow. However, I feel like I am constantly having amazing ideas for new works of varying degrees of difficulty that may or may not ever get made, and instead of waiting the full 21 years or so to see whether they do get made,  I thought I might make a collection of these fictional (or more optimistically yet to be made works) here on my blog. I wanted to have a book, like artists have books, but instead of it being work I have made, the works in it are ones I could have/might have/should have made. A portfolio of the future. This is the first one.)

Posted by THE MEANS AND THE WAYS at 4:19 AM No comments:

Email ThisBlogThis!Share to TwitterShare to FacebookShare to Pinterest
Labels: choreography, the fondue set, works yet to be made
Older Posts Home
Subscribe to: Posts (Atom)

THE MEANS AND THE WAYS
This is the seldom updated blog of Jane McKernan. I am a choreographer from Sydney.